An Executive Summary of the Evidence

The evidence-base for DSRP Theory is extensive in the systems sciences, systems thinking, cognitive science, and neuroscience literature

A summary of a vast literature is often difficult if not inadvisable. Even more so for something like systems thinking, that is of interest to both scientists and academics as well as practitioners and the general public. For this reason, we have tried to summarize the literature in a way that is accessible and maintains fidelity to what the literature says. If for nothing else but pedagogical purposes, summaries are useful. A summary of the interdisciplinary literature on relating to systems thinking points to the following conclusions:

Regarding #1 above, it is increasingly clear that these D, S, R, and P structures cannot be separated from each other—in other words, they are in a constant and dynamic interplay. Indeed, it is clear that each of the D, S, R, and P structures is necessary and sufficient for each of the individual structures to exist. This means that, in order for an S (part-whole system) to be formed, Ds (distinctions) need to be made, Rs (relationships) need to exist, and Ps (perspectives) need to be taken; and vice versa. In addition, any given D, S, R, and P structure cannot be divorced from its two elements nor can the elements be divorced from each other. For example, we are near-constantly making identity distinctions (Di) and more often than not unaware of the other distinctions (Do) we are implying. Nevertheless, those Do exist.

Regarding #2 above: This is perhaps read as a philosophical statement, but it is based on empirical findings. It does not mean that every DSRP structure that we build in our minds exists in nature or vice versa. But it does mean that the D, S, R, and P structures are found in both realms. This is important because it tells us something about the goal of systems thinking itself. The goal of systems thinking is: to increase the probability that our mental models are in alignment with reality. Working with a set of structures that is common to both mind and nature–akin to finding the same denominator to add fractions—is an essential first step in increasing this probability.

Regarding #3 above: Indeed, it can be said that it is the awareness of these structures which constitutes the skill of systems thinking. Cognition occurs, whether you like it or not, often in ways that we in which we are unaware.  Metacognition (awareness of D, S, R, P structures and dynamics) helps us to see structurally what we are potentially missing and fill in the gaps.

Want to see a more extensive evidence base? 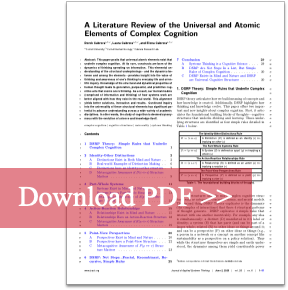 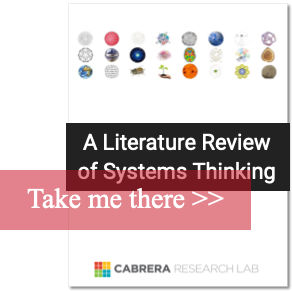