What happens to S rule if it turns out what some physicists portend about the universe is true-that at the most fundamental level bits of discrete space are not separable into smaller parts?

Part-whole expands the full continuum of scale in the universe, but some physicists think the smallest stuff might not be divisible...

Related to this article on S rule, we were asked the question above. The question was slightly more elaborate:

Stephen Wolfram's physics project and the loop quantum gravity theory advanced by Carlo Rovelli and others both suggest that infinitely small in not the case, thus at the most fundamental level bits of discrete space are inseprable into further smaller pieces. Through their interaction and based on some simple rules networks of higher organisation emerges: time, matter, energy, and information are the result of those interactions. I have been reading about DSPR theory and thinking of what would be the implication of it, if this is the case, for systems thinking and systems science in general, and also for the DSPR theory, GST, and Bogdanov's Tektology in particular.

Of course the point is, physicists have been saying such things for many moons and they keep proving themselves wrong. But, if it turns out to be the case, it would be of some theoretical interest but wouldn’t be of great significance to DSRP theoretically or pragmatically. What you would effectively have is a continuum that is end-capped at ~~ 10^-35 to 10^35. Thus the rule would universally apply to the [dimensionally] infinite array of phenomena on the continuum minus 2 (so ∞-2). Not much of a dent in the universality and if universality begins and ends at those end caps, then the rule is still universal, it’s just not infinite in spatial dimension. 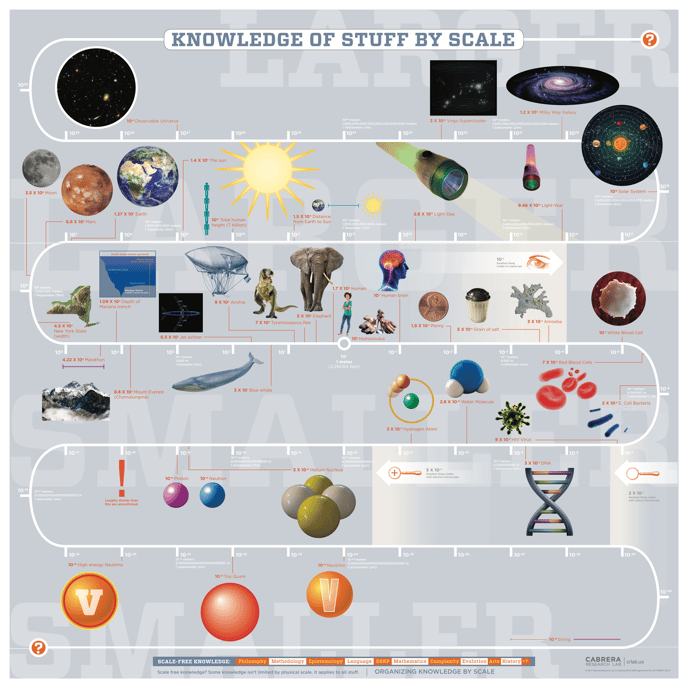 To which the following question was asked:

...that sounds very reasonable, yet if the finitely small gravitational quanta is the case, then it would mean that the empty space, which fills all the known universe, forms the greatest and most common form of existence (since it fills even the space between and within quarks). The margin of the sub atomic to atomic particles and non living and living matter to the world of ideas on which we do apply systems thinking remains relatively tiny in comparison to immensely unorganized gravitational field (space) out of which every other thing emerges. This would make what we call 'nothing' un organized space particles, and all the other things differently organized entities, which gains new properties as the level of organization scales upwards.

Exactly. that’s why Distinctions are made up of the elements identity-other. Indeed DSRP theory works in the same way. There is much more ‘nothing’ than there is something. This ‘nothing’ is what holds it all together even though we are most often not aware of it. In turn the other patterns and elements (e.g., S, R, P) all have the same properties of D conferred upon them (i.e., R-what is related and not related; S-what is organized and not organized; P-what is viewed and not viewed). DSRP Theory isn’t about merely the four patterns but the modular and fractal dynamics of their elements.