Adapted from the article originally written by Tiffany Agard

What is Network Theory?

Network theory studies the relationships between objects, which can include people, where objects are known as “nodes” or ”vertices” and the connecting forces known as “edges”. Network theory allows us to understand how information or materials flow through these systems and how susceptible they are to failure when faced with external pressures.

Network theory, also a part of graph theory, first ”arrived” as early as 1736 with Leonhard Euler’s paper on the Seven Bridges of Konigsberg. He sought to understand how to cross all seven bridges of Konigsberg (now Kaliningrad) without crossing one twice. The field was strongly integrated into the social sciences beginning in the 1970s, following Travers’ and Milgram’s 1969 study on “small world method”, more commonly known as, six degrees of separation. Network theory is a critical part of the third wave of systems thinking that focused on human development. 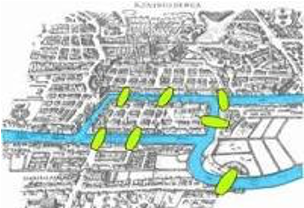 Networks develop in a non-linear and complex fashion. The shape and connectivity determines the diffusion of information across networks.

Health workers leveraged network theory to trace points of contact to contain the 2014 Ebola outbreak. They reviewed transportation routes and family and social networks to identify individuals who may have been exposed to the virus through infected persons. Rapid assessment and early detection were key to analyzing and reducing the diffusion of the virus and further highlighted how interconnected rural and urban places can be.

The total number of edges related to the number of nodes will determine the degree of connectivity of the network. Edges can also be directional-based and categorized by strength (or weakness) based on the flow of information. Weak nodes can help bring diversity and protect against groupthink. Diversity of nodes and edges can increase the robustness of the system and its ability to maintain stability in light of external shocks.

Networks operate on an understanding of space (topology) that can be contradictory to the physical geography. Two major cities like Boston and New York may seem more connected to each other than New York City and Ithaca, due to increased transportation, commercial, and social networks, even though the two pairs of cities are relatively the same physical distance apart.

Effective communication between communities and health workers is key to make tracing efforts successful. Currently, a small part of the Congo is experiencing an Ebola outbreak. Efforts to contain the virus have been difficult because communities are often mistrusting of health officials and unwilling to communicate about those who may be carrying the virus.