Adapted from the article originally written by Muhammad Ali Ilahi

OODA loop was a concept developed by military strategist and Airforce Colonel John Boyd in the 1950s. OODA, which stands for Observe, Orient, Decide, Act was initially deployed to the concept of combat operations but is now used widely ranging from commercial operations to corporate strategies. The concept of the OODA loop places more emphasis on agility than absolute strength and explains how timely decisions can sometimes lead to unlikely gains for the underdogs. 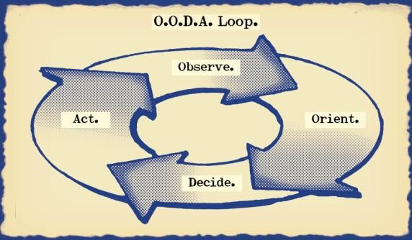 Quite a lot of emphasis is placed on getting into another person’s OODA loop as a means of gaining advantage over them.

OODA loop is made up of 4 main components. Observe normally implies to be aware of everything around oneself, and to take it in. To Orient is the next step, which adds meaning to your observations. The next two steps, Decide and Act are based on analysis and execution.1 In real world scenario, people often do not have 100% information, but they must decide and act nonetheless according to what they determine to be as the best move given the conditions. This is a continuous loop, as each step helps give feedback and improves the overall cycle. Feedback from the action

loop might result in a more mature observing behavior for future scenarios, which in turn would affect the other components of the loop.

Although the OODA loop was employed initially for technical systems only (1st wave), it currently is in the 3rd wave stage as it has incorporated political systems, and attends to power relations. It is now applicable to a diverse array of fields ranging from the traditional technical to business and politics. The OODA loop comes into play, whenever there are split second judgements to be made, that are tense, uncertain and rapidly developing.2

An aspect of the concept involves managing the OODA loop of one’s opponent or component, that will allow one to gain advantage over them. In practice, this may involve a SWAT team trying to manage a law and order situation, or a corporation attempting to outsmart its counterparts.