What happened to the "Fifth Principle"...Pattern?

In Remedial Genius, Cabrera mentions 5 Principles of Knowledge but in DSRP there are only 4. What happened to the fifth?

The short answer: it got renamed for the sake of clarity of communication. All of the changes are semantic (meaning they don't fundamentally alter the structure, but were chosen to better communicate the originally intended meaning).  Net-net, the newer formulation is simply a more efficient and effective reformulation of the original, using more accurate terminology and a cleaner, easier to understand structure. These changes were the result of 20 years of learning and evolving how to explain it and teach it rather than any substantive change to the DSRP theory itself. Theoretically speaking, nothing has changed, but the explanatory power of later versions is significantly better.

In the formulation in Remedial Genius, the inclusive structure of a within 1 and i, ii, iii, and iv within 1a was not clear at all (above list). It is predominantly for this reason that a later formulation was adopted where a,b,c,d are all sub to 1 (below list). Later, "Principles" are renamed to be "Patterns" as in "Four Patterns of Thinking". Thus, the four Patterns of Thinking are:

This latter formulation was made for several reasons. Most notably that the original intention was to communicate that the four structures (D, S, R, and P) were Patterns of content and structure. So in the latter, more accurate, formulation, D, S, R, and P are all Patterns and the elements of Patterns are Information and Structure (meaning that each of these structures are variables that "take" information as values).  This is critically important because the idea of Patterns of content and context (which later became information and structure as well as the idea of mind and matter which later become mental models and real world remain intact in the Systems Thinking Loop below:

Thus, one can see that all the terminology in Remedial Genius has a structural equivalent in the current formulation, it is just better and more clearly organized.  What was once mind and matter is more precisely called mental models and real-world system. In turn, mental models are made up of patterned variable structures (DSRP) that take information as values. Together, the ST Loop represents the very essential nature of systemic cognition, cognitive complexity or what we call, "systems thinking."

The shift from Knowledge to thinking was simply a shift in the Complex Adaptive System (CAS) from the global focus of outputs or emergent properties of Human Knowledge (in which these structures are present) to the local focus of agency and simple rules. In that sense, today DSRP are often communicated not as "patterns" but as simple rules. But, these terms are simply mirror images of each other in the local-global CAS. This is now formulated as Patterns/Simple Rules and Co-Implying Elements like so:

This basic structure is explicated in the book, Systems Thinking Made Simple, on page 129, in the logic table that explains the Patterns and their elements (below). 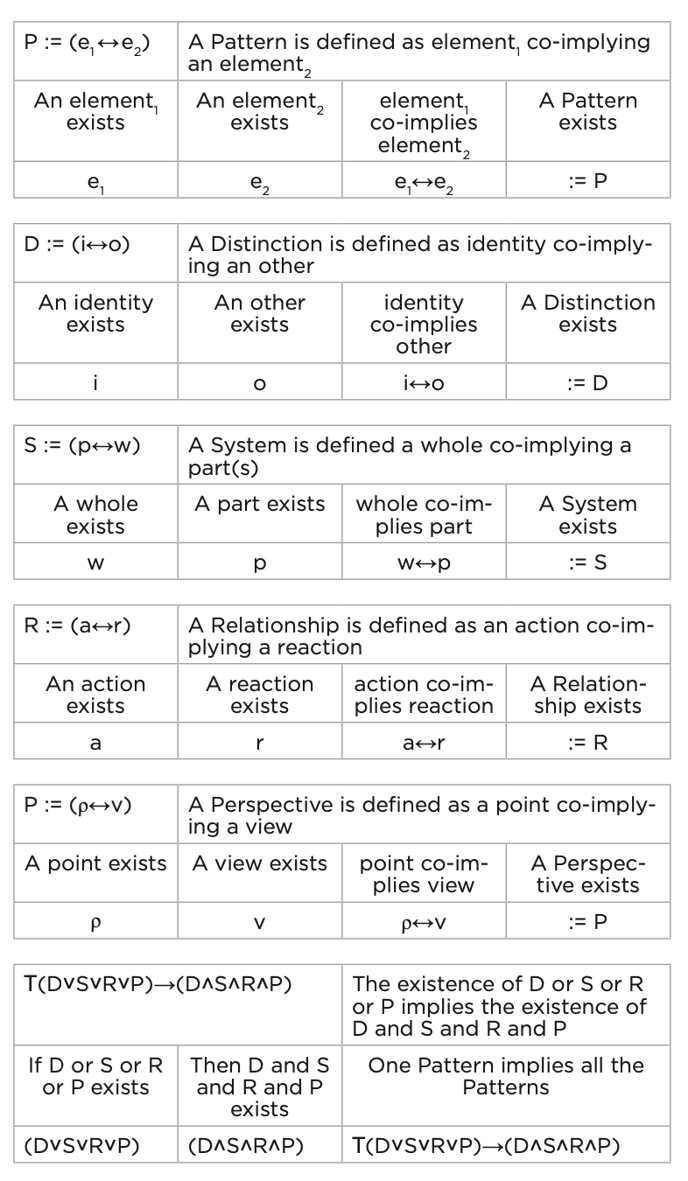 You will notice too, that some of the elements have changed. This was due mostly to the terms having differing meanings across disciplines of knowledge (i.e., from physics to sociology). The names of the elements changed from Remedial Genius to Thinking At Every Desk and then Systems Thinking Made Simple; again, for semantic and pedagogical reasons that made it easier to language and explain. The terms, cause and effect, for example, while roughly accurate, holds different meanings across the disciplinary landscape, whereas action-reaction are far more accurate and universally accepted. The terms, thing-nothing while accurate, were initially confusing for readers, and where therefore replaced with the terms, identity-other; they are also more commensurate with the literature. The terms, point and view (originally named content and context) are more accurate and the prior configuration was confusing to readers. Again, these changes are semantic in nature. They do not change the original structure or meaning of the theory itself. But they do have a positive effect semantically and pedagogically.