What is the happy mindblown emoji?

A minblowing emoji that is happy about it rather than worried about it...

We need a new mindblown emoji. Because the only ones that exist are unhappy or worried or afraid.

But having your mind blown is an amazing and happy event. And, it is something that happens a lot when learning new concepts in systems thinking. In fact, graduate students in Dr. Cabrera's courses made the gesture or shared the afraid mindblown emoji in chat and as a background (in Covid Zoom times) so often that Cabrera—concerned that we were engendering a fearful or anxious metaphor toward science—developed the first known happy mind blown emoji for his graduate students to use. You too can now use it! 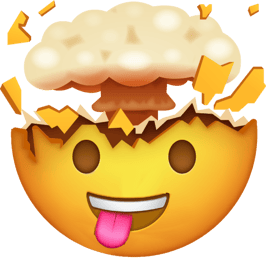 On a trip to the Galapagos Archipelago with graduate students from Cornell, Cabrera also coined the term and hashtag #litwoke a portmanteau of the expressions "lit" (to be lit) and "woke" (to be woke). Given that science is both lit and woke, Cabrera combined them. The hashtag #litwoke is often used in conjunction with the happy-mindblown-emoji.